I had two more visitors, and at the perfect time.  I needed a week off relaxing on the beach, only a local competition coming up, it was the perfect time to press reset.  Emily and Niqui landed in Manila and shortly thereafter, we headed to Puerto Princesa, Palawan.  Emily is about to start medschool, Niqui had just finished second year of medschool, and I like saving money, so we booked a budget AirBnB.

We walked to a dodgy little beach near the hut and enjoyed a day soaking up the sun and hanging out in the bathwater ocean.  After grabbing a tasty dinner we headed to bed early, we had a 7am start for the Underground River Tour.   We knew the hut was in the country, that there was no A/C and that we would hear some roosters.  We were not aware that there would be literally no breeze and that the house was located, not near a couple roosters, but next to a chicken/rooster farm.  There were over 25 roosters crowing at 4am.

We were picked up promptly at 7am, a miracle!  It was on time.  We then proceeded to drive around for 2 hours picking up other tourists – 2 hours.  Finally, the bus was full and we were going to see the Underground River!  Then we overheard the tour guide say it was another two hours to the river.  Excuse me?  I thought the Underground River was IN Puerto Princesa.  At this point we felt fairly committed though, so we decided to stick out out.

An hour into the ride we pulled off at Ugong Rock where we were instructed to watch the educational video…aka a promotional video for Ugong Rock.  Apparently, for another fee we could climb through a cave and go ziplining.  What?  I was told I would be going to the Underground River, can I please go there?  No.  We were held captive, pay fee or sit around.  Out of pure stubbornness we refused.  The guide said it would only take the other people 20 minutes and we would be off.  I found that hard to believe.  45 minutes later we decided it was time to purchase a beer.  Then another, and another.  After 45 more minutes the rest of the tour finally got back.  We got a beer for the road, it could be a while. 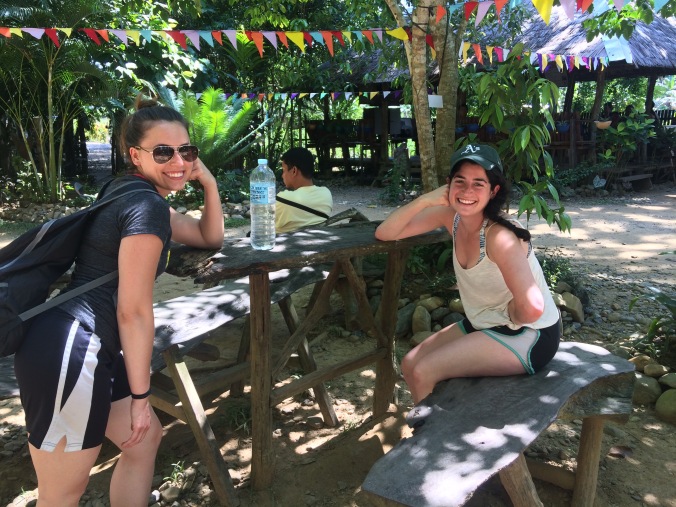 Waiting out the zipline excursion like stubborn children. Pre-beer.

Finally, we arrived at the Underground River.  We put on our hardhats and set out for the tour.  I almost got shit on by 3,000,000 bats, nodded out a few times on the boat, and could hardly see a thing.  Then it was over.  We were back on the van and I was arguing with the driver about the order in which we would be dropped off – Niqui, Emily, and I would not be last. A failure/waste of day, thankfully we did a good job of keeping ourselves entertained throughout the entire ordeal.

Hardhats on, ready to go in the cave!

Exhausted, we decided to head back to the hut and get some sleep, after all, we’d be up at 4am anyway.  A group of girls staying in the hut next to ours disagreed, they thought it was a good time to poorly sing karaoke, shrieking at the top of their lungs.  They would regret this decision when the roosters begin singing at 4am.

Sure enough, we were up and ready to go by 5am, we decided to make a day of it and head to a beach.  The iconic Honda Bay required a boat, so we headed to the best hotel in the town just in time for an overpriced, but delicious, buffet breakfast.  We saw on the map that there was a sandbar, so we walked over.  We were greeted by a long, plastic floating dock.  Might as well walk it.  We sat out on the end of the dock looking out at the water for nearly an hour.  To say I was in good company would be an understatement.  These ladies took a shitty situation and turned it into gold, time and time again.  We finished off the morning with a delicious cocktail before sending Emily on her 5-week long journey around Southeast Asia.

Where is the “sandbar”?

All smiles at the end of the dock.